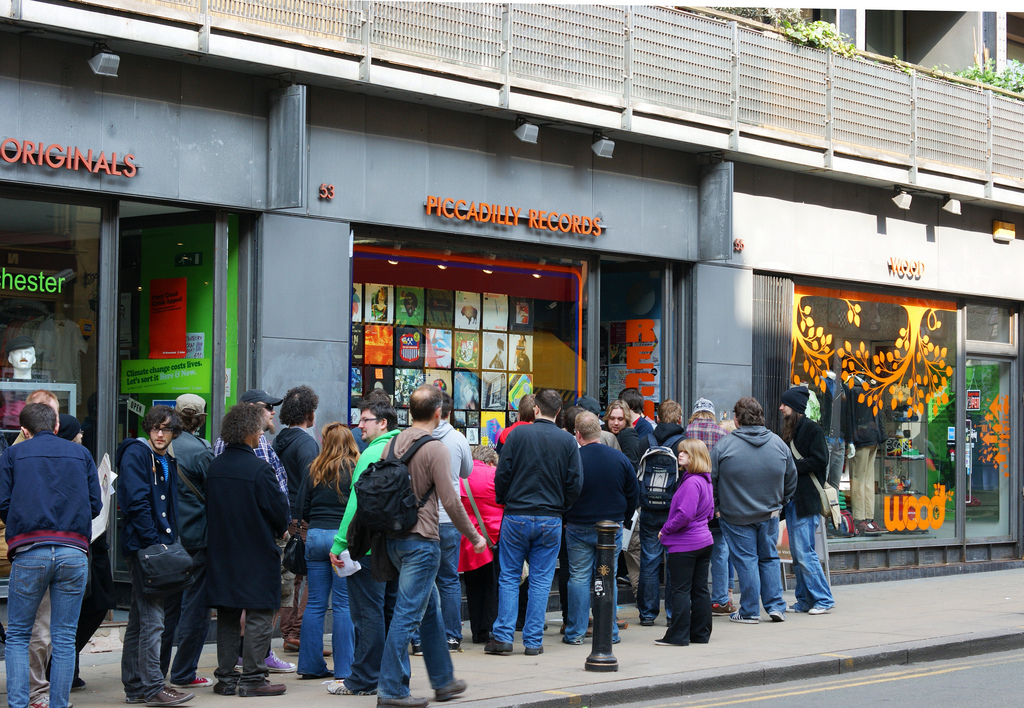 ‘Record stores can’t save your life. But they can give you a better one.’ Nick Hornby

Since 2008, Record Store Day has endeavoured to celebrate the culture of the independently owned record store. With the rise of digital music sales and online retailers, it was a bright initiative to remind people (or in some cases possibly inform people) that record stores actually exist. It was timely too; just seven months prior to the idea being conceived, iconic retail conglomerate Tower Records closed after filing for bankruptcy and liquidation. Whilst it wasn’t these large corporate behemoths that Record Store Day sought to shine a light on, it was indicative of what was happening in the music industry at large, in particular, the dramatic fall in sales of physical product and the rise in more accessible digital distribution. Record Store Day was (and still is) an attempt to bring some romanticism back into the act of purchasing of music.

It was a bright initiative, originally inspired by the success of Free Comic Book Day, an annual event created to encourage new readers to visit independent comic book stores. The idea for RSD is generally attributed to two people who worked in the independent music retail sector, Chris Brown from Bull Moose Music based in Portland, Maine and Eric Levin, the owner of Criminal Records in Atlanta, Georgia. In an e-mail dated 27th July 2007, Brown fleshed out the idea to Michael Kurtz, president of The Department of Record Stores across North America. ‘I'm just thinking as I type,’ he wrote ‘but it could be a national event that drives people to indie stores. We would need all coalitions–not just the ones we usually work with, plus all the unaffiliated indies.’

You will find more infographics at Statista

When you think about it, it’s astonishing how quickly Record Store Day became such a gargantuan global success. In 2008, the year of its launch, there were approximately 10 designated special releases to mark the day. This year, there are 560 (I counted them). I don’t think anyone would doubt the concept of Record Store Day or the good intentions of those who set it up and considering vinyl sales have steadily increased year-on-year in conjunction with its launch, there is an argument that suggests it’s succeeded in its intention; to help people rediscover (or discover) a desire to leave the house and visit their local, independent record store. According to Spencer Hickman, UK co-ordinator of Record Store Day and former manager of Rough Trade East, it's now the biggest day of the year for independent record shops, proving more profitable than the entire week before Christmas. But there are factors that have a knock on effect on the industry at large which would have been tricky to predict upon the idea’s conception in 2007.

The problem seemed to stem from no-one predicting quite how quickly Record Store Day would become embraced by the industry at large. Its success has created a paradox that has caused considerable collateral damage across the independent music sector. This isn’t a new problem; as far back as 2014, Kudos, a London-based independent music distribution company that helps distribute physical and digital releases from thousands of small labels, published a blog that attempted to explain the extent of the issue. ‘Kudos’ physical release schedule will be pretty quiet for the next few weeks’ it began. ‘The cause of this new release drought might surprise you; Record Store Day. Right now, we have 20+ manufacturing jobs in production, all of which have come to a grinding halt while the pressing plants make hay by pressing up umpteen thousand Oasis LP re-issues, Abba 7”s and REM Box sets. We have even had one vinyl plant refuse any order of less than 500 units until after Record Store Day. So, for the next six weeks, we are effectively locked out of the vinyl business.’ The blog continues ‘Kudos have always been a strong supporter of Record Store Day. We have participated since its inception and have enjoyed some notable successes. However, it now feels like it has been appropriated by major labels and larger indies to the extent that smaller labels who push vinyl sales for the other 364 days of the year are effectively penalised.’

Many labels have jumped on the Record Store Day initiative, seeing it as a way to drive sales at what was a traditionally lackadaisical time of year without actually contemplating whether anyone was actually crying out for a vinyl version of No More Idols by Chase and Status. Or yet another vinyl re-issue of Pink Floyd’s A Saurcerful of Secrets, the 120th time it’s been reissued according to Discogs.com (officially that is ... 139 times if you count the unofficial reissues as well). Or a vinyl variant of one of Heaven 17’s biggest commercial flops, the ironically titled Bigger Than America, an album that failed to chart in the UK, Australia, France, Germany, The Netherlands, New Zealand, Sweden and, yes(!) the USA (although Wikipedia reliably informs me that it got to number #1 on Germany’s Alphabeat Redaktionscharts' Rock/Pop/Alternative Chart, a chart that sounds cunningly invented specifically for the release of Bigger Than America). Surely this is the artistic equivalent of re-releasing Police Academy 7: Mission to Moscow on 4K Ultra HD but consequently having to push back the release of Jordan Peele’s Us by several months. Rob Sevier of The Numero Group, a Chicago-based archival label summed it up quite succinctly in 2011 when he said ‘(There are) literally hundreds of pieces of s**t being shoved into the marketplace on (Record Store Day); products, for the most part, that no human needs to own, ever. The economy of Record Store Day is, 'What can we s**t into the form of a record and shove into the hands of the wanton masses?'’

You could argue that these releases are playing to consumers wishes; in terms of physical sales, reissues form a large part of physical sales in the modern era. But when a 180g double coloured vinyl reissue of Bananarama’s Drama is delaying the release of new music by new artists, many of whom are on independent labels, it feels as if the original intention behind Record Store Day has been lost behind a multi-coloured variance of limited edition pressings and 7” singles. In 2016, the frontman of California’s premium powerviolence trio Nails gave a stark, unrelenting account to Metal Hammer as to how Record Store Day affected their 3rd album. ‘I hate Record Store Day,’ he said. ‘It’s completely f**ked over things for regular bands – go ahead and have your multi-coloured vinyl reissues you f**king poseur. The fact is that when [Nails’ 2013 album] Abandon All Life came out before the pressing plants were backed up, we handed our record in to Southern Lord on January 15 and our record was out by March 20. For [Nails’ 2016 album] You Will Never Be One Of Us we handed everything in to the record label on January 20 and our record’s not coming out until June 17. Why? Because of f**king Record Store Day, that’s why.”

Following the vinyl resurgence, demand has been high and sales continue to grow (9.7million sales in the US in 2018 according to a report from Buzzangle, a roughly 12% increase from 2017). After some initial reticence from the music industry at large (probably fearing the vinyl resurgence was a fad ... which it still might be) more pressing plants are beginning to open. But the RSD backlog historically has caused a significant disruption to the release of new music. Plus, with shelf space being limited in record stores, often there simply isn’t room for new releases on shelves, as RSD stock is bought by shops with a no returns policy. So if an indie store buys in 10 copies of the reissued Does the Cosmic Shepherd Dream of Electric Tapirs? by Japanese psych-rock outfit Acid Mothers Temple and it doesn’t fly off the shelves, that shop is stuck with stock they’ve paid for upfront with no hope of returning it back to the distributor. In 2016, Phil Harding, the boss of Taunton’s Blackcat Records, told the Quietus an anecdotal account of record stores having to borrow money to buy stock because of a serious lack of cash flow around Record Store Day. Which, to my mind, sort of defeats the object of having a day dedicated to independent record stores in the first place.

There are other issues too; with the vast majority of RSD releases being limited editions, scalpers have caught on to the fact and are now queuing outside independents at 6am on the day to buy up as many of these limited releases as they can to sell on at widely inflated prices, making a small fortune in the process. You’ll be able to see for yourself soon enough; Record Store Day 2019 is this Saturday and I guarantee if you type ‘Record Store Day’ in to eBay around lunchtime on the 13th April, you’ll see a huge swathe of those 560 releases for 3, 4, 5 maybe even 6 times their recommended retail price. And unfortunately, people will buy them, once again countering the point of Record Store Day in the first place. Record stores do try to counter this by limiting the amount of RSD releases each customer can buy, which helps of course, but it doesn’t eradicate the problem entirely.

Worryingly, there doesn’t appear to be a consensus on how many independent record shops there are in the UK. I’ve taken a story from The Vinyl Factory in March 2016 (although it was reported widely by various outlets) which boldly claims in its headline that the number of physical music shops in the UK was at a record high. A cursory glance reveals there to be ‘14,727 physical shops in the UK which sell records, CDs, DVDs and Blu-ray’. Already, the addition of ‘DVDs and Blu-Ray’s’ has slightly skewed the bold proclamation made in the article’s headline. The report, undertaken by the Entertainment Retailers Association claims that the number of stores selling music and video has more than doubled since 2009. Read further though (and we already know that most won’t) and you discover that the figures are skewed even further, due to the inclusion, for the first time, of retail chains such as Boots, Primark, WHSmith and Urban Outfitters. I will give £1,000 to anyone who can prove they bought a Bananarama's Drama from Urban Outfitters!

It’s almost as if these reports are created in such a way to hide the real data and simply spin their own narrative (imagine that!) By my count, according to this incredibly handy map on Vinyl Hub there are currently 756 independent record stores in the UK. If that’s true, then maybe Record Store Day has had a positive effect on indie record stores, as The Quietus reported that by the end of 2008 (the year RSD started) there were just 305. Further good news comes from the fact that Record Store Day seem to have listened to some of the criticisms regarding too many releases clogging up the pressing factories for ostensibly just one day of the year (in 2014, there were 643 RSD releases, 83 more than there are this year). But it feels to me that in order for Record Store Day to truly fulfil its modus operandi, it needs to take one step backwards before it can take two steps forward.